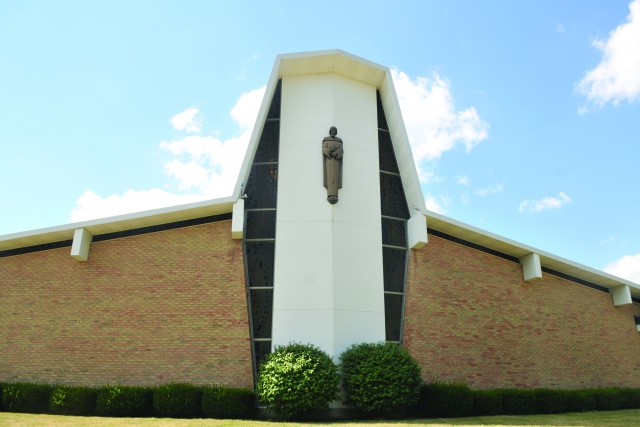 St. Paul’s origins date back to mid-1900s. On Pentecost Sunday, June 1, 1952 more than 200 people attended the first Mass at the newly organized Catholic mission church of St. Paul the Apostle in downtown Ithaca. Father Paul E. Foster greeted everyone as the 9 a.m. Sunday morning service began. The Catholic Church of St. Paul the Apostle became a reality. That first Mass was offered in a vacated auto dealership building on Pine River Street. Prior to that time, Catholics in the area traveled to Alma, St. Louis or Bannister. But, now they had their own parish…albeit without a proper church building.

It didn’t take long, however, for the younger parish to raise funds to build a church. In September of 1952, Father Charles L. Ganley replaced Father Foster and a year later in May of 1953 ground was broken for a new colonial-style church to be built on the corner of Emerson and Union streets. On Sunday, Nov. 8, 1953, Father Ganley sang the first Latin High Mass in the almost completed church, preceded by a blessing of the interior. However, formal dedication ceremonies were held June 29, 1954. Bishop Woznicki celebrated the Mass, Speaking in both Latin and Polish. It was a glorious day for all those who had worked so hard to see that a proper church was built in Ithaca. The church featured 10 stained glass windows, a choir loft, and a basement meeting hall.

It was in 1964 that new liturgical rules were implemented governing the Mass being celebrated in English versus Latin, having the congregation and not just the choir participate during Mass, having other musical instruments besides the organ played during Mass, and new rules for fasting and abstinence. These changes evolved out of the Second Vatican Council and were implemented world-wide throughout all Catholic churches.

In the 1960s the small Ithaca parish grew–grew so much that it outgrew its new building. It also needed religious education classrooms and a parish hall. Occasional downpours tended to flood the basement which was used as a community hall for the church. Functions scheduled for the basement often had to be postponed or crews with mops and buckets had to swiftly clean up the water before the functions could be held. On Sep, 14, 1969, the present church was dedicated by Most Rev. Bishop Francis F. Reh, the then newly installed Bishop of the Diocese of Saginaw. The church features hand made Facet Glass windows above the alter, hand-crafted by a Midland artist and donated by the Dionise family.